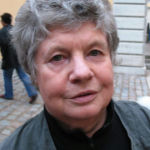 Why Is A. S. Byatt Influential?

According to Wikipedia, Dame Antonia Susan Duffy , known professionally by her former marriage name as A. S. Byatt , is an English novelist, poet and Booker Prize winner, and won the 2017 Park Kyong-ni Prize. In 2008, The Times named her on its list of the 50 greatest British writers since 1945.

Other Resources About A. S. Byatt

What Schools Are Affiliated With A. S. Byatt?

A. S. Byatt is affiliated with the following schools:

What Are A. S. Byatt's Academic Contributions?

A. S. Byatt has made the following academic contributions: