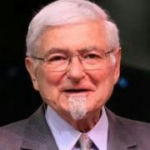 Why Is C. Peter Wagner Influential?

According to Wikipedia, Charles Peter Wagner was a missionary, writer, teacher and founder of several organizations. In his earlier years Wagner was known as a key leader of the Church Growth Movement and later for his writings on spiritual warfare.

Other Resources About C. Peter Wagner