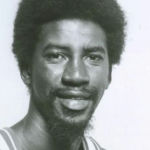 Why Is Caldwell Jones Influential?

According to Wikipedia, Caldwell "Pops" Jones was an American professional basketball player. Jones was drafted out of Albany State College by the Philadelphia 76ers with the 14th pick in the 1973 NBA draft. He played three seasons in the American Basketball Association and 14 seasons in the National Basketball Association , most extensively with the 76ers.

Other Resources About Caldwell Jones

What Schools Are Affiliated With Caldwell Jones?

Caldwell Jones is affiliated with the following schools: