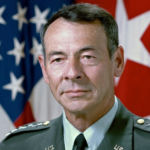 Why Is Carl Stiner Influential?

According to Wikipedia, Carl Wade Stiner was a United States Army four-star general who served as Commander in Chief, United States Special Operations Command from 1990 to 1993. Military career Stiner was born in LaFollette, Tennessee, on September 7, 1936. He graduated from Tennessee Polytechnic Institute in 1958 with a Bachelor of Science degree and was commissioned in the Infantry. He served initially with the 9th Infantry Regiment at Fort Benning, Georgia and commanded a basic training company at Fort Jackson.

Other Resources About Carl Stiner

What Schools Are Affiliated With Carl Stiner?

Carl Stiner is affiliated with the following schools: