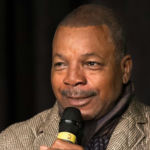 Why Is Carl Weathers Influential?

According to Wikipedia, Carl Weathers is an American actor and former professional football player. He is known for his roles as boxer Apollo Creed in the first four Rocky films , George Dillon in Predator , Action Jackson in Action Jackson , and Chubbs Peterson in Happy Gilmore and in Little Nicky , and Combat Carl in the Toy Story franchise. He also portrayed Det. Beaudreaux in the television series Street Justice and a fictionalized version of himself in the comedy series Arrested Development , and voiced Omnitraxus Prime in Star vs. the Forces of Evil . He has a recurring role as Greef Karga in the Star Wars series The Mandalorian .

Other Resources About Carl Weathers

What Schools Are Affiliated With Carl Weathers?

Carl Weathers is affiliated with the following schools: