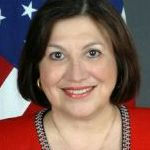 Why Is Carmen Lomellin Influential?

According to Wikipedia, Carmen Lomellin is an American diplomat of Mexican heritage from East Chicago, Indiana. Lomellin served as United States Ambassador to the Organization of American States from 2009 to 2016. Biography Lomellin was appointed in May, 1998 to the position as executive secretary of the Inter-American Commission of Women for the Organization of American States by Secretary General Cesar Gaviria. She served as CIM executive secretary until March 2009. In that position, she provided guidance and direction to the OAS member states and permanent secretariat on hemispheric policy advancing issues affecting women, particularly in the areas of human rights and gender equality. As head of the CIM permanent secretariat, Lomellin oversaw the activities of the commission's delegates representing the 34 democracies of the Western Hemisphere and managed the daily operations of the permanent secretariat. She most recently served as director for outreach within the OAS Department of External Relations.

Other Resources About Carmen Lomellin

What Schools Are Affiliated With Carmen Lomellin?

Carmen Lomellin is affiliated with the following schools: