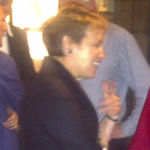 Why Is Caroline Thomson Influential?

According to Wikipedia, Caroline Agnes Morgan Thomson, Baroness Liddle was chair of the charity Oxfam until October 2020. She is a former BBC executive and was the Corporation's chief operating officer, from 2006 to 2012 and she stood in for Mark Thompson, the former director general, when necessary.

Other Resources About Caroline Thomson

What Schools Are Affiliated With Caroline Thomson?

Caroline Thomson is affiliated with the following schools: