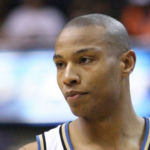 Why Is Caron Butler Influential?

According to Wikipedia, James Caron Butler is an American professional basketball coach and former player who is an assistant coach for the Miami Heat of the National Basketball Association . During a 14-year career he played for the Miami Heat, Los Angeles Lakers, Washington Wizards, Dallas Mavericks, Los Angeles Clippers, Milwaukee Bucks, Oklahoma City Thunder, Detroit Pistons, and Sacramento Kings of the National Basketball Association . Butler is a two-time NBA All-Star and was the 2002 Big East Conference Men's Basketball Player of the Year, while playing for the Connecticut Huskies.

Other Resources About Caron Butler

What Schools Are Affiliated With Caron Butler?

Caron Butler is affiliated with the following schools: