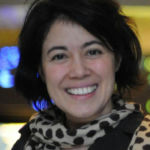 Why Is Caterina Fake Influential?

According to Wikipedia, Caterina Fake is an American entrepreneur and businesswoman. She co-founded the websites Flickr in 2004 and Hunch in 2007. Fake has been a trustee for nonprofit organizations and was the chairwoman of Etsy. For her role in creating Flickr, Fake was listed in Time magazine's Time 100, and she has been recognized within Silicon Valley for her work as an angel investor.

Other Resources About Caterina Fake

What Schools Are Affiliated With Caterina Fake?

Caterina Fake is affiliated with the following schools: