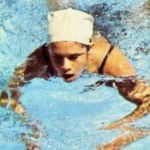 Why Is Catie Ball Influential?

According to Wikipedia, Catharine Ball Condon , née Catharine Northcutt Ball, is an American former competition swimmer, Olympic champion, and former world record-holder in three events. At the 1968 Summer Olympics, she won a gold medal as a member of the winning U.S. 4×100-meter medley relay team. Ball is a former world record holder in the 100-meter and 200-meter breaststroke events, and is remembered as a teenage star who was the dominant female breaststroke swimmer of her generation.

Other Resources About Catie Ball

What Schools Are Affiliated With Catie Ball?

Catie Ball is affiliated with the following schools: