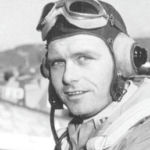 Why Is Cecil E. Harris Influential?

According to Wikipedia, Captain Cecil Elwood "Cece" Harris was an American schoolteacher, naval aviator and flying ace of World War II. Harris is remembered for actions in the Pacific Ocean Theater, which earned him nine combat medals including the Navy Cross, the highest award for valor after the Medal of Honor. He ended the war as the navy's second-highest-scoring ace after David McCampbell , credited with shooting down 24 Japanese planes. Harris scored 16 of his aerial victories in four different days, downing four enemy aircraft on each of those days. Never during the course of his 88-day tour with VF-18 did a bullet hit his aircraft. It has been said that Harris "was arguably the most consistently exceptional fighter pilot in the US Navy".

Other Resources About Cecil E. Harris

What Schools Are Affiliated With Cecil E. Harris?

Cecil E. Harris is affiliated with the following schools: