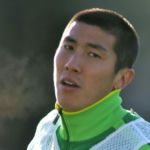 Why Is Cha Du-ri Influential?

According to Wikipedia, Cha Du-ri is a retired South Korean professional footballer. He played as a right back, right winger, or striker. He is the first Korean player who was born outside of Korea to have played in a FIFA World Cup. Cha's father, Cha Bum-Kun played in the 1986 World Cup. Cha Du-Ri has also played for one of his father's old clubs, Eintracht Frankfurt. During the third-place match of the 2011 AFC Asian Cup against Uzbekistan, Cha captained the national team in place of the regular Korean captain, Park Ji-Sung.

Other Resources About Cha Du-ri

What Schools Are Affiliated With Cha Du-ri?

Cha Du-ri is affiliated with the following schools: