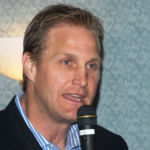 Why Is Chad Hennings Influential?

According to Wikipedia, Chad William Hennings is a former American football defensive tackle for the Air Force Academy Falcons and Dallas Cowboys. He won the Outland Trophy in his senior year of college in 1987. Despite facing an obligation to enter the Air Force upon graduating the Academy, Hennings was selected in the eleventh round of the 1988 NFL Draft by the Cowboys, and played in the National Football League from 1992 to 2000, winning three Super Bowls.

Other Resources About Chad Hennings

What Schools Are Affiliated With Chad Hennings?

Chad Hennings is affiliated with the following schools: