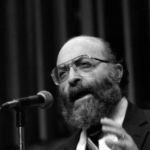 Why Is Chaim Potok Influential?

According to Wikipedia, Chaim Potok was an American author and rabbi. His first book The Chosen , was listed on The New York Times’ best seller list for 39 weeks and sold more than 3,400,000 copies. Biography Herman Harold Potok was born in Brooklyn, New York, to Benjamin Max and Mollie Potok , Jewish immigrants from Poland. He was the oldest of four children, all of whom either became or married rabbis. His Hebrew name was Chaim Tzvi . He received an Orthodox Jewish education. After reading Evelyn Waugh's novel Brideshead Revisited as a teenager, he decided to become a writer . He started writing fiction at the age of 16. At age 17 he made his first submission to the magazine The Atlantic Monthly. Although it was not published, he received a note from the editor complimenting his work. He attended high school at Marsha Stern Talmudical Academy, Yeshiva University's boys high school.

Other Resources About Chaim Potok

What Schools Are Affiliated With Chaim Potok?

Chaim Potok is affiliated with the following schools:

What Are Chaim Potok's Academic Contributions?

Chaim Potok has made the following academic contributions: