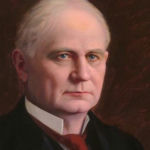 Why Is Champ Clark Influential?

According to Wikipedia, James Beauchamp Clark was an American politician and attorney who represented Missouri in the United States House of Representatives and served as Speaker of the House from 1911 to 1919. Born in Kentucky, he established a law practice in Bowling Green, Missouri. He won election to the House in 1892, lost his seat in 1894, and won the seat back in 1896. He became the House Minority Leader in 1908 and was elevated to Speaker after Democrats took control of the House in the 1910 elections. He inadvertently helped defeat the Canadian–American Reciprocity Treaty of 1911 by arguing that ratification of the treaty would lead to the incorporation of Canada into the United States.

Other Resources About Champ Clark

What Schools Are Affiliated With Champ Clark?

Champ Clark is affiliated with the following schools: