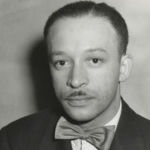 Why Is Charles Alston Influential?

According to Wikipedia, Charles Henry Alston was an American painter, sculptor, illustrator, muralist and teacher who lived and worked in the New York City neighborhood of Harlem. Alston was active in the Harlem Renaissance; Alston was the first African-American supervisor for the Works Progress Administration's Federal Art Project. Alston designed and painted murals at the Harlem Hospital and the Golden State Mutual Life Insurance Building. In 1990, Alston's bust of Martin Luther King Jr. became the first image of an African American displayed at the White House.

Other Resources About Charles Alston

What Schools Are Affiliated With Charles Alston?

Charles Alston is affiliated with the following schools: