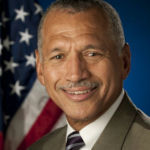 23rd Administrator of NASA and astronaut

Why Is Charles Bolden Influential?

According to Wikipedia, Charles Frank Bolden Jr. is a former Administrator of NASA, a retired United States Marine Corps Major General, and a former astronaut who flew on four Space Shuttle missions. A 1968 graduate of the United States Naval Academy, he became a Marine aviator and test pilot. After his service as an astronaut, he became Deputy Commandant of Midshipmen at the Naval Academy.

Other Resources About Charles Bolden

What Schools Are Affiliated With Charles Bolden?

Charles Bolden is affiliated with the following schools: