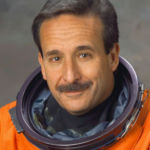 Why Is Charles Camarda Influential?

According to Wikipedia, Charles Joseph "Charlie" Camarda is an American engineer and a NASA astronaut who flew his first mission into space on board the Space Shuttle mission STS-114. He served as Senior Advisor for Engineering Development at NASA Langley Research Center. and was a senior advisor for innovation at the office of Chief Engineer in the Johnson Space Center.

Other Resources About Charles Camarda

What Schools Are Affiliated With Charles Camarda?

Charles Camarda is affiliated with the following schools: