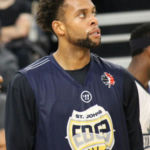 Why Is Charles Hinkle Influential?

According to Wikipedia, Charles Phillip Hinkle is an American professional basketball player who plays for Nacional of the Liga Uruguaya de Básquetbol. Born in the Los Angeles area, he played high school basketball at Los Alamitos High School before moving to Hebron Academy. He then joined Vanderbilt University to play for the Commodores and redshirted his freshman season. After receiving limited playing time, he transferred to the American Eagles for his final two years and was one of the top NCAA Division I scorers as a senior.

Other Resources About Charles Hinkle

What Schools Are Affiliated With Charles Hinkle?

Charles Hinkle is affiliated with the following schools: