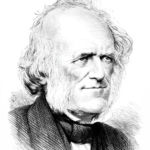 Why Is Charles Lyell Influential?

According to Wikipedia, Sir Charles Lyell, 1st Baronet, was a Scottish geologist who demonstrated the power of known natural causes in explaining the earth's history. He is best known as the author of Principles of Geology , which presented to a wide public audience the idea that the earth was shaped by the same natural processes still in operation today, operating at similar intensities. The philosopher William Whewell termed this gradualistic view "uniformitarianism" and contrasted it with catastrophism, which had been championed by Georges Cuvier and was better accepted in Europe. The combination of evidence and eloquence in Principles convinced a wide range of readers of the significance of "deep time" for understanding the earth and environment.

Other Resources About Charles Lyell

What Schools Are Affiliated With Charles Lyell?

Charles Lyell is affiliated with the following schools:

What Are Charles Lyell's Academic Contributions?

Charles Lyell has made the following academic contributions: