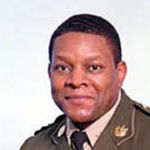 Why Is Charles Moose Influential?

According to Wikipedia, Charles Alexander Moose was an American author and police officer. He was best known for his role as being the primary official in charge of the efforts to apprehend the D.C. sniperss in October 2002. During his law enforcement career, Moose served as the chief of police for Montgomery County, Maryland, and Portland, Oregon.

Other Resources About Charles Moose

What Schools Are Affiliated With Charles Moose?

Charles Moose is affiliated with the following schools: