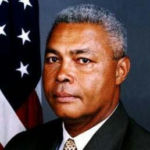 Why Is Charles A. Ray Influential?

According to Wikipedia, Charles Aaron Ray is an American former diplomat who acted as the U.S. Ambassador to Zimbabwe between 2009 and 2012. He is a former Foreign Service Officer and career member of the Senior Foreign Service who held the position of U.S. Ambassador twice, and retired with the rank of Minister-Counselor. He is also a retired U.S. Army officer who was decorated twice for his actions in combat during the Vietnam War, and later served as the Deputy Assistant Secretary of Defense for POW/Missing Personnel Affairs.

Other Resources About Charles A. Ray

What Schools Are Affiliated With Charles A. Ray?

Charles A. Ray is affiliated with the following schools: