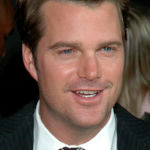 Why Is Chris O'Donnell Influential?

Other Resources About Chris O'Donnell

What Schools Are Affiliated With Chris O'Donnell?

Chris O'Donnell is affiliated with the following schools: