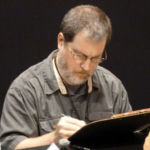 Why Is Chris Sprouse Influential?

According to Wikipedia, Chris Sprouse is an American comics artist. Sprouse has worked for multiple publishers and has won two Eisner Awards for his work on Tom Strong, a series he created with writer Alan Moore. Biography Chris Sprouse was born in Charlottesville, Virginia. At the age of 3 he moved with his family to New Delhi, India where he first discovered comics as he was unable to play outside due to the dangerous amount of snakes in the house yard. When he was 6, his family returned to the United States to Dale City, Virginia, where he continued to read and draw comics. Before his debut in comics, Sprouse drew a comic strip entitled Ber-Mander for the school newspaper while attending Gar-Field Senior High School in Woodbridge. After graduating in 1984, Sprouse attended James Madison University where he studied graphic design.

Other Resources About Chris Sprouse

What Schools Are Affiliated With Chris Sprouse?

Chris Sprouse is affiliated with the following schools: