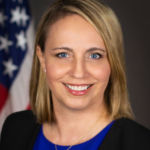 Why Is Christi Grimm Influential?

According to Wikipedia, Christi A. Grimm is an American government official who has served as the Inspector General in the United States Department of Health and Human Services since February 2022. Early life and education Grimm holds a Bachelor of Arts from the University of Colorado, Denver and a Master of Public Administration from New York University. She is also a graduate of the Kennedy School of Senior Managers in Government at Harvard University.

Other Resources About Christi Grimm

What Schools Are Affiliated With Christi Grimm?

Christi Grimm is affiliated with the following schools: