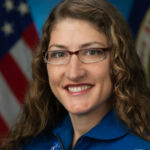 Why Is Christina Koch Influential?

According to Wikipedia, Christina Hammock Koch is an American engineer and NASA astronaut of the class of 2013. She received Bachelor of Science degrees in electrical engineering and physics and a Master of Science in electrical engineering at North Carolina State University. She also did advanced study while working at the Goddard Space Flight Center. Just before becoming an astronaut, she served at the National Oceanic and Atmospheric Administration as station chief for American Samoa.

Other Resources About Christina Koch

What Schools Are Affiliated With Christina Koch?

Christina Koch is affiliated with the following schools: