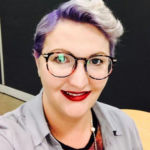 Why Is Christina Richey Influential?

According to Wikipedia, Christina "Chrissy" Richey is an American planetary scientist and astrophysicist working at Jet Propulsion Laboratory in La Cañada Flintridge, California. Richey is a project staff scientist for the Europa Clipper mission and is a research technologist in the Astrophysics and Space Sciences Section. Prior to working at JPL, Richey worked as contractor for Arctic Slope Regional Corporation at NASA Headquarters in Washington, D.C. They were a program officer in NASA's Planetary Science Division, the deputy program scientist for the OSIRIS-REx mission, and the deputy science advisor for research and analysis for the Science Mission Directorate.

Other Resources About Christina Richey

What Schools Are Affiliated With Christina Richey?

Christina Richey is affiliated with the following schools: