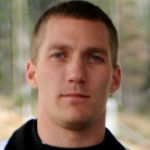 Why Is Christopher Fogt Influential?

According to Wikipedia, Christopher Fogt is a United States Army Major, three time USA Olympian, and Olympic Silver medalist. He won a Silver Medal at the 2014 Olympic Games in Sochi as a member of the famed Team Night Train, in the four-man event. He also competed in the two-man Bobsled event in Sochi, earning 12th place with pilot, Cory Butner. He competed in the 2010 Vancouver Games as a member of USA-2, in the four-man event with pilot John Napier. After taking three years off after the 2014 Winter Olympic Games in Sochi, he returned to the Sport in 2017 with long time friend and teammate Steve Langton earning a spot on his third USA Winter Olympic Team to compete in PyeongChang, 2018. He competed in PyeongChang with pilot Justin Olsen in the four-man event.

Other Resources About Christopher Fogt

What Schools Are Affiliated With Christopher Fogt?

Christopher Fogt is affiliated with the following schools: