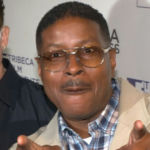 Why Is Christopher Reid Influential?

According to Wikipedia, Christopher Reid , formerly known as Kid , is an American actor, comedian and former rapper. During the peak of his career with the rap duo Kid 'n Play , Reid was notable for his exaggerated hi-top fade haircut.

Other Resources About Christopher Reid

What Schools Are Affiliated With Christopher Reid ?

Christopher Reid is affiliated with the following schools: