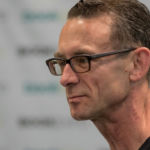 Why Is Chuck Palahniuk Influential?

According to Wikipedia, Charles Michael "Chuck" Palahniuk is an American freelance journalist and novelist who describes his work as transgressional fiction. He has published 19 novels, three nonfiction books, two graphic novels, and two adult coloring books, as well as several short stories. He is most notably the author of the novel Fight Club, which also was made into a film of the same name, starring Edward Norton, Helena Bonham Carter, and Brad Pitt.

Other Resources About Chuck Palahniuk

What Schools Are Affiliated With Chuck Palahniuk?

Chuck Palahniuk is affiliated with the following schools:

What Are Chuck Palahniuk's Academic Contributions?

Chuck Palahniuk has made the following academic contributions: