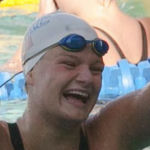 Why Is Cierra Runge Influential?

According to Wikipedia, Cierra Runge is an American competition swimmer. Career Runge was born in Cochranville, Pennsylvania, to Scott and Diane Runge. She is a 2014 graduate of Octorara High School. She was on the Jennersville YMCA swim team when she was younger . She attended the University of California, Berkeley her freshman year under Teri McKeever and afterwards took a whole year off to focus her efforts on making the 2016 U.S. Olympic team. Runge came back to collegiate swimming attending the University of Wisconsin-Madison, where she swam for head coach Whitney Hite. For her last two years of NCAA eligibility, she transferred to Arizona State University, where she worked with Bob Bowman.

Other Resources About Cierra Runge

What Schools Are Affiliated With Cierra Runge?

Cierra Runge is affiliated with the following schools: