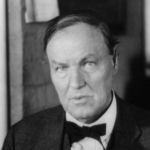 Why Is Clarence Darrow Influential?

According to Wikipedia, Clarence Seward Darrow was an American lawyer who became famous in the early 20th century for his involvement in the Leopold and Loeb murder trial and the Scopes "Monkey" Trial. He was a leading member of the American Civil Liberties Union, and a prominent advocate for Georgist economic reform.

Other Resources About Clarence Darrow

What Schools Are Affiliated With Clarence Darrow?

Clarence Darrow is affiliated with the following schools: