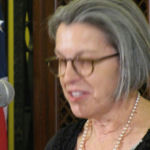 Why Is Claudia Emerson Influential?

According to Wikipedia, Claudia Emerson was an American poet. She won the 2006 Pulitzer Prize for her poetry collection Late Wife, and was named the Poet Laureate of Virginia by Governor Tim Kaine in 2008. Early life Emerson was born on January 13, 1957 in Chatham, Virginia, and graduated from Chatham Hall preparatory school in 1975. She received her BA in English from the University of Virginia in 1979 and her Master of Fine Arts in creative writing at the University of North Carolina at Greensboro in 1991.

Other Resources About Claudia Emerson

What Schools Are Affiliated With Claudia Emerson?

Claudia Emerson is affiliated with the following schools: