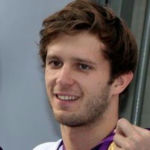 Why Is Clément Lefert Influential?

According to Wikipedia, Clément Lefert is a retired French Olympic champion in swimming. He won a gold medal at the London 2012 Summer Olympics in the 4 × 100 meters freestyle relay, with teammates Amaury Leveaux, Fabien Gilot, and Yannick Agnel, besting the American relay team that included Michael Phelps. He also won a silver medal in the 4 x 200 meters freestyle relay. Lefert is an economics major at the University of Southern California , and holds USC's record in the 200 yard freestyle .

Other Resources About Clément Lefert

What Schools Are Affiliated With Clément Lefert?

Clément Lefert is affiliated with the following schools: