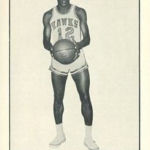 Why Is Cleo Hill Influential?

According to Wikipedia, Cleo Hill was an American professional basketball player who was selected by the St. Louis Hawks in the first round of the 1961 NBA draft. A guard from Newark, New Jersey and the Winston-Salem State University, Hill played in the National Basketball Association for one season with the Hawks, in 1961–62, averaging 5.5 points in 58 games. Hill was only the fifth African-American from an historically Black college and university to be taken in the first round of an NBA draft.

Other Resources About Cleo Hill

What Schools Are Affiliated With Cleo Hill?

Cleo Hill is affiliated with the following schools: