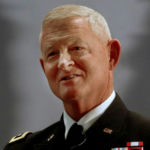 Why Is Clyde A. Vaughn Influential?

According to Wikipedia, Clyde A. Vaughn is a retired United States Army Lieutenant General who served as Director of the Army National Guard. Early life Clyde Allen Vaughn, Jr. was born in Columbia, Missouri on April 27, 1946. He graduated from Dexter High School in Dexter, Missouri, received a Bachelor of Science degree in education from Southeast Missouri State University in 1968 and became a high school history teacher and football coach in Dexter, Missouri. While at college he became a member of the Sigma Tau Gamma fraternity, Alpha Phi chapter.

Other Resources About Clyde A. Vaughn

What Schools Are Affiliated With Clyde A. Vaughn?

Clyde A. Vaughn is affiliated with the following schools: