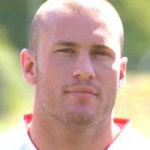 Why Is Conor Casey Influential?

According to Wikipedia, Conor Patrick Casey is a former American soccer player and current head coach of the Charleston Battery competing in the USL Championship. He played for 16 seasons, finishing his career with Columbus Crew SC, before turning to coaching with his former club Colorado Rapids.

Other Resources About Conor Casey

What Schools Are Affiliated With Conor Casey?

Conor Casey is affiliated with the following schools: