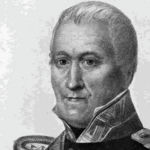 According to Wikipedia, Cornelis Rudolphus Theodorus, Baron Krayenhoff was a physicist, artist, general, hydraulic engineer, cartographer and – against his will and for only a short time – Dutch Minister of War. Biography His father was a hydraulic engineer and soldier in Nijmegen, with brewing as a sideline. Krayenhoff was educated in Nijmegen, Arnhem and Harderwijk. In the latter city he met Herman Willem Daendels, later a fellow-revolutionary. He had been intended to study law, but began to study philosophy and medicine instead . He wrote his dissertations on the theory of the imagination and a medical survey of the dysentery epidemic that raged in Nijmegen in 1783. He established himself as a physician in Amsterdam, after he had declined an offer of a professorate in medicine at Franeker university. He was a member of the Concordia et Libertate genootschap and of Maatschappij tot Nut van 't Algemeen. In the Felix Meritis genootschap he presented physics experiments and lectured on art history, while taking lessons in painting. He refused a request to take charge of organizing military inundations around Amsterdam during the Patriot Revolt of 1785–7. This may have contributed to the fall of Amsterdam to the Prussians in 1787, when they intervened in favor of stadtholder William V.

What Schools Are Affiliated With Cornelis Rudolphus Theodorus Krayenhoff?

Cornelis Rudolphus Theodorus Krayenhoff is affiliated with the following schools: