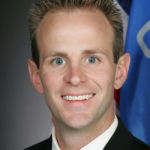 Why Is Cory T. Williams Influential?

According to Wikipedia, Cory T. Williams is an American attorney and Democratic politician from the U.S. state of Oklahoma. He currently served in the Oklahoma House of Representatives as the District 34 State Representative from 2009 to 2019. The seat was formerly held by Terry Ingmire, a Republican. He was first elected to the seat in 2008.

Other Resources About Cory T. Williams

What Schools Are Affiliated With Cory T. Williams?

Cory T. Williams is affiliated with the following schools: