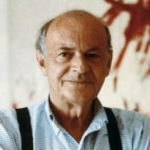 Why Is Cy Twombly Influential?

According to Wikipedia, Edwin Parker "Cy" Twombly Jr. was an American painter, sculptor and photographer. He belonged to the generation of Robert Rauschenberg and Jasper Johns. Twombly is said to have influenced younger artists such as Anselm Kiefer, Francesco Clemente, and Julian Schnabel. Generally large-scale, freely-scribbled, calligraphic and graffiti-like works on solid fields of mostly gray, tan, or off-white colors. His later paintings and works on paper shifted toward "romantic symbolism", and their titles can be interpreted visually through shapes and forms and words. Twombly often quoted poets such as Stéphane Mallarmé, Rainer Maria Rilke and John Keats, as well as classical myths and allegories, in his works. Examples of this are his Apollo and The Artist and a series of eight drawings consisting solely of inscriptions of the word "VIRGIL".

Other Resources About Cy Twombly

What Schools Are Affiliated With Cy Twombly?

Cy Twombly is affiliated with the following schools: