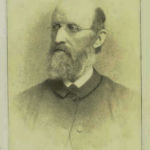 Why Is Cyrus Hamlin Influential?

According to Wikipedia, Cyrus Hamlin was an American Congregational missionary, co-founder of Robert College, and the father of A. D. F. Hamlin. Biography Hamlin was born in Waterford, Maine and grew up on his family's farm estate. At sixteen, he entered an apprenticeship as a silversmith and jeweler in Portland, Maine before deciding to enter the ministry. He first attended Bridgton Academy before heading to college. He graduated from Bowdoin College in 1834 and from Bangor Theological Seminary in 1837. The Hamlins were a prominent nineteenth-century Maine family which also produced a Vice President of the United States and at least two Civil War generals, one of whom was also named Cyrus Hamlin.

Other Resources About Cyrus Hamlin

What Schools Are Affiliated With Cyrus Hamlin?

Cyrus Hamlin is affiliated with the following schools: