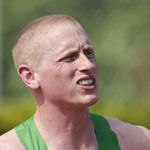 Why Is Cyrus Hostetler Influential?

According to Wikipedia, Cyrus Hostetler is an American javelin thrower who competed at the 2012 Summer Olympics and 2016 Summer Olympics. High school At Newberg High School, Cyrus lettered in football, basketball, and baseball. He did not pick up a javelin until his senior year of high school. At the PAC-9 District Meet, Cyrus took first in javelin with a throw of 60.7 meters and also placed fifth in triple jump. He also took third place at the Oregon State Meet, with a throw of 61.49 meters . Cyrus finished the year at the 2005 USA Junior Nationals with a personal best of 62.55 meters and taking fifth place.

Other Resources About Cyrus Hostetler

What Schools Are Affiliated With Cyrus Hostetler?

Cyrus Hostetler is affiliated with the following schools: