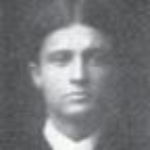 Why Is D. A. McDaniel Influential?

According to Wikipedia, David Albert McDaniel was an American football player and coach. He served as the head football coach at the University of Arkansas in 1903, compiling a record of 3–4. Born in 1876 to Lewis Tillman and Cornelia McDaniel, he was an alumnus of the University of Texas. He was later a lawyer and teacher, based in Waco. He died there in 1958.

Other Resources About D. A. McDaniel

What Schools Are Affiliated With D. A. McDaniel?

D. A. McDaniel is affiliated with the following schools: