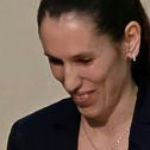 Why Is Dalma Iványi Influential?

According to Wikipedia, Dalma Iványi is a Hungarian basketball player and coach, who played as a guard. She won 10 Nemzeti Bajnokság I/A Championships with Mizo Pécs 2010 and PINKK-Pécsi 424. She also played for Utah Starzz, Phoenix Mercury, and San Antonio Silver Stars in the American Women's National Basketball Association. Iványi is the current coach of Hungarian club .

Other Resources About Dalma Iványi

What Schools Are Affiliated With Dalma Iványi?

Dalma Iványi is affiliated with the following schools: