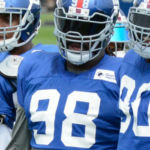 Why Is Damon Harrison Influential?

According to Wikipedia, Damon Paul Harrison is a former American football defensive tackle. He played college football at William Penn University and was signed by the New York Jets as an undrafted free agent in 2012. He has also been a member of the New York Giants, Detroit Lions, Seattle Seahawks and Green Bay Packers. According to Pro Football Focus, he led the league in run-stop percentage between 2013 and 2016.

Other Resources About Damon Harrison

What Schools Are Affiliated With Damon Harrison?

Damon Harrison is affiliated with the following schools: