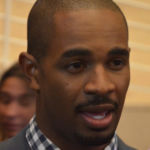 Why Is Damon Wayans Jr. Influential?

According to Wikipedia, Damon Kyle Wayans Jr. is an American actor and comedian. He is most widely known for starring as Brad Williams in the ABC sitcom Happy Endings, for which he was nominated for the Critics' Choice Television Award for Best Supporting Actor in a Comedy Series in 2012, and as Coach in the Fox sitcom New Girl. In 2014, he starred in the comedy film Let's Be Cops, and provided the voice of Wasabi in Big Hero 6.

Other Resources About Damon Wayans Jr.

What Schools Are Affiliated With Damon Wayans Jr.?

Damon Wayans Jr. is affiliated with the following schools: