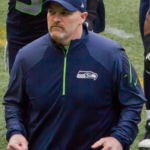 Why Is Dan Quinn Influential?

According to Wikipedia, Daniel Patrick Quinn is an American football coach who is the defensive coordinator for the Dallas Cowboys of the National Football League . He came to prominence as the defensive coordinator of the Seattle Seahawks from 2013 to 2014, where he was the playcaller for the team's Legion of Boom secondary. Under Quinn, Seattle led the league in defense and made two consecutive Super Bowl appearances, winning the franchise's first in Super Bowl XLVIII. This success led to Quinn being named head coach of the Atlanta Falcons, where he served for six seasons.

Other Resources About Dan Quinn

What Schools Are Affiliated With Dan Quinn ?

Dan Quinn is affiliated with the following schools: