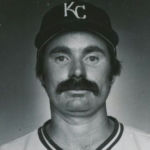 Why Is Dan Quisenberry Influential?

According to Wikipedia, Daniel Raymond "Quiz" Quisenberry was an American right-handed relief pitcher in Major League Baseball who played primarily for the Kansas City Royals. Notable for his submarine-style pitching delivery and his humorous quotes, he led the American League in saves a record five times . Quisenberry retired in 1990 with 244 saves, then the fifth-highest total in major league history.

Other Resources About Dan Quisenberry

What Schools Are Affiliated With Dan Quisenberry?

Dan Quisenberry is affiliated with the following schools: