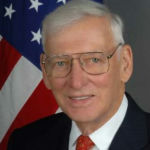 Why Is Dan Rooney Influential?

According to Wikipedia, Daniel Milton Rooney was an American executive and diplomat best known for his association with the Pittsburgh Steelers, an American football team in the National Football League , and son of the Steelers' founder, Art Rooney. He held various roles within the organization, most notably as president, owner and chairman.

Other Resources About Dan Rooney

What Schools Are Affiliated With Dan Rooney?

Dan Rooney is affiliated with the following schools: