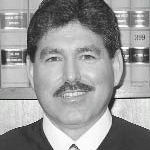 Why Is Dana Sabraw Influential?

According to Wikipedia, Dana Makoto Sabraw is the Chief United States District Judge of the United States District Court for the Southern District of California. He was nominated by President George W. Bush in 2003. Early life and education Sabraw is half-Japanese; his Japanese mother met his father in 1954 when he was a United States Army soldier stationed in Japan during the Korean War. They married in 1955. His father was a teacher of special-needs students and his mother taught English as a second language.

Other Resources About Dana Sabraw

What Schools Are Affiliated With Dana Sabraw?

Dana Sabraw is affiliated with the following schools: